ECB split on how to handle any Greek bond losses: sources

- Geruzie over of de ECB verlies moet accepteren of niet en hoe daar mee om te gaan. Misschien hadden ze ze gewoon nooit moeten kopen ! Ik zie niet wie er nou ook maar enigszins wat mee opgeschoten is. Europees belastinggeld door het putje !
Uiteraard gaan de Grieken vroeg of laat zelf voor een faillissement kiezen, als wij die keuze niet nu al maken.
(Reuters) - The European Central Bank has ruled out taking voluntary losses on its Greek bond holdings but is now debating how it would handle any forced losses and whether to explore legal options to avoid such a hit, central bank sources told Reuters on Wednesday.
Earlier this month, speculation that the bank was considering taking losses on its Greek bonds as part of broader moves to stabilize Athens' finances grew after ECB President Mario Draghi repeatedly dodged questions on the issue.
One source close to talks among ECB policymakers said that whileFrance, Italy and the ECB board in Frankfurt were against accepting losses, some national central banks, which have expressed reservations over the bond purchases from the start, now accepted that losses may be unavoidable.
"The ECB will not take losses on its Greek bond holdings voluntarily ... but there is a fierce debate within the ECB on how to handle forced losses," the source said.
Another source said the bank was holding regular talks on Wednesday and Thursday and aimed to hammer out its position on the losses it should or should not be willing to take on its Greek bonds.
The ECB declined to comment.
Athens has been in talks with private creditors on a voluntary debt swap deal that would wipe 65-70 percent off the face value of its bonds.
But it has also threatened to enforce losses on private investors if fewer than expected sign up to the deal voluntarily.
If it takes that route, the question is whether the ECB would then be able to avoid taking writedowns on the Greek bonds it has bought since starting a controversial bond buying program in May 2010.
Analysts estimate the ECB has roughly 40-45 billion euros worth of such bonds, making it Athens' single biggest creditor. They also believe the ECB paid 25-30 percent below face value for the bonds.
The ECB may perhaps try to argue that it should be treated differently from other bond holders because its purchases were part of its emergency response to the debt crisis.
Economists have also speculated that it could try to carve out a deal to pass the bonds over to theeuro zone rescue fund, the EFSF, which would take the hit instead.
Alternatively, it could simply accept back what it paid for the bonds, although even that would entail some complications.
IMF PRESSURE
Greece's talks with private investors hit a hurdle after euro zone ministers rejected the creditors' final offer for a 4 percent coupon on new bonds to be issued by Athens, increasing the chance that the latter would have to enforce losses.
Greece needs a deal to avoid a chaotic default when big bond redemptions come due in late March.
International Monetary Fund Managing Director Christine Lagarde put pressure on the ECB on Wednesday, saying it and other public creditors may need to accept losses if those taken by the private sector are not enough to bring Greece's debt burden down to a sustainable level.
While ECB chief Draghi this month avoided commenting on the issue, its vice president Vitor Constancio said the central bank had not changed its position from that expressed by Draghi's predecessor, Jean-Claude Trichet.
Trichet said in June that the ECB had no intention to extend the maturities of its debt holdings, a key element in making Greece's debt sustainable.
Now some of the countries which were most in favor of the ECB starting to buy government bonds in May 2010 through its Securities Markets Program (SMP), including Italy and France, vehemently oppose accepting any losses on them, the source said.
Separate sources said that the ECB Executive Board shared this view, but one added that in the event of Greece imposing losses some central banks see losses as an unavoidable consequence of the risk taken when the ECB launched the SMP program.
"We are of the opinion that it may be unavoidable," the source said.
If the ECB finds a way to avoid losses even if other investors are forced to accept them, it could sap demand for Italian, Spanish, Portuguese and Irish debt that the ECB has also bought, as markets would view the ECB as having 'preferred status'.
"This could do more damage than good," one source said.
(Reporting by Eva Kuehnen, Andreas Framke; Writing by Sakari Suoninen; Editing by Hugh
http://www.reuters.com/article/2012/01/25/us-ecb-greece-idUSTRE80O2B020120125
Gepost door Unknown op 00:25 Geen opmerkingen:

Greece is insolvent." This sentence can be read from the first of the fourteen pages that make up the report Debt Restructuring: Ramifications for the Euro Area, published in June 2011 and written by Anne Sibert, head of economic department of Birkbeck College. What is surprising is the applicant: the European Parliament. One month prior to the approval of the second rescue plan, therefore, Brussels was aware of what happened. The document Sibert, in fact, leaves little room for optimism, and criticizes the EU. "Despite the insistence of members of the Executive Committee of the European Central Bank and European politicians to say the opposite," says the economist, Greece will fail before 2013. But not only. The paper also anticipates the European Council of 21 July, when it was introduced the Private Sector Involvement (PSI), which is the direct involvement of private creditors in debt restructuring Hellenic. Just what we now ran aground on the discussion between banks and the government of Lucas Papademos.
Debt restructuring, legal problems, effects of bankruptcy on European trade, bank contagion. The analysis is as clear as anticipatory. The Sibert, in no uncertain terms, explain what will happen to Greece. And it does so in great detail, also trying to explain how Europe could set up a defensive system. Since it is insolvent, Athens will have to declare default, bankruptcy, then, before the fund-saving States Permanent European Stability Mechanism (ESM) comes into operation. The reference is still the original ESMA Sibert, 2013, but as we have seen over the past six months, Brussels ahead of the times a year, claiming to want to turn the ESM in July 2012. The legitimate question is, reading this document, only one: why have not listened to Sibert?
The text of the economist, along with many of the same content paper was presented at a hearing of the then ECB President Jean-Claude Trichet, the European Parliament. It was June 30, 2011 , a month before the second bailout Athens. Trichet said several times that we must avoid the default of Greece, both full and selective. Yet, the French central banker has before him several economists, whose services have been expressly requested by the European Parliament, who are pointing out that Athens can no longer do anything. They spend weeks, worsens the situation and get the introduction of the PSI. In this way, the EU wants to share with the private creditors, ie banks and investment funds, the losses of any default in Athens. The first idea is to apply a haircut, that is, a devaluation of the nominal value of bonds held in the portfolio of 21 percent. Yet the public continues to disprove this hypothesis. "Greece will not fail", firmly reiterates a number of the Eurogroup, Jean-Claude Juncker on several occasions. However, the situation does not improve. Indeed, more and more spins.
On 21 October, during yet another mission of the International Monetary Fund, the technicians confirm what will happen. The debt sustainability analysis (DSA) leaves no room for different interpretations. The greek debt, about 365 billion euros, has already exceeded 165% of the gross domestic product without a full adoption of the IMF program could exceed 186% in 2013. Private creditors, led by the Institute of International Finance (IIF), it requires more effort, a haircut of 50 percent. Only in this way, officials said the IMF, one can expect that the debt can come back in Hellenic 120% share of GDP at the end of 2020. Alternatively, you can apply a haircut of 60%, which would bring the debt / GDP ratio to 110% at the same time period.
Both the ECB and the EU have long known what the situation is to Greece. In fact, going backwards, the first time that the Sibert said his Athens, at the request of the European Parliament, was June 5, 2010. "Greece is likely to become insolvent, you have to do everything possible to avoid infection and must act quickly, without fear of clearly explain the situation," he wrote in a paper that still can be found in the archives of the EU Parliament. Yet, even then, the EU did nothing.
Athens is now closer to the abyss. The European Commission, together with the IMF and the ECB, has sent its engineers to Greece to try to find a solution to what probably will happen. The next fact a bond expires March 20 Hellenic value of 14.4 billion euros. Must be repaid and, according to figures from the DSA of the IMF, in the homes of the Treasury in October there were 11 billion euros. Too few to repay its obligation. To make matters worse there is stalemate between the government and IIF. Today, the table will resume after a pause for reflection lasted 4 days. The fear is that there is no dish on how to avoid the default, but as content.

Already mired in controversy about whether it should play a greater role in solving the European financial crisis, the European Central Bank is facing criticism over what they’ve already done to help — buying Greek debt.
Negotiators involved in lowering Greece’s private-sector debt (known as Private Sector Involvement) believe the ECB

should also accept a haircut on the Greek debt on their books.

Their argument is as follows: the ECB bought Greek debt

at a discount, or below face value, and yet they expect to be repaid at full face value. Private-sector creditors are asking: why should the ECB get 100 cents on the euro when they paid less than that? And should the ECB be making a profit on Greek debt as the country struggles on the massive weight of its obligations?
Critics say they don’t expect the ECB to take the same level of losses as the private sector (currently expected to be 50 cents), but wonder why the ECB isn't open to settling simply for what it already paid for that debt. In other words, if they paid 80 cents for a one euro bond, why can't they just accept 80 cents?

Those involved in the negotiations said the ECB staff isn’t open to discussion on the matter. Advocates for the ECB’s position said the bank is getting paid to backstop the country, and as the lender of last resort, the ECB should be paid a fee for that service.
It isn’t known how much Greek debt is at the ECB — it doesn't make that number public. The central bank has bought Greek debt in the secondary market and also accepted it as collateral. A consensus price among negotiators, based on how Greek debt has traded since early 2010, is about 75 cents on the euro. The ECB won’t say and won’t comment on the controversy.
The question may very well come up at tomorrow’s press conference after the ECB announces its monthly decision on interest rates.
© 2012 CNBC.com
Gepost door Unknown op 02:07 Geen opmerkingen: 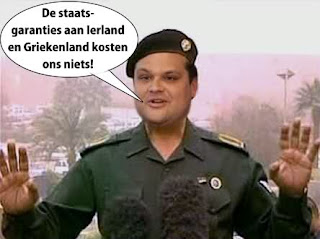